The Minion SS is a ‘semi-slick’ off-road cycle tyre designed to provide fast-rolling downhill riding performance, with toothy bite in the corners for reliable cornering grip.

An important member of the Minion tyre range, plenty of publications snapped up the opportunity to test these tyres, and we’ve gathered their reviews here:

“Secure cornering hold that comes at an earlier lean angle, which will suit riders looking for consistent grip.

The edge tread blocks are the same as the hugely popular Minion tyre, and point straight into the earth more than other similar designs tested, and are paired with lower, angular tread squiggles down the centre.

This means the slip-to-grip sensation on looser or low-grip surfaces is toned down, but, the flipside is a secure cornering hold that comes at an earlier lean angle, which will suit riders looking for consistent grip. It feels more like a traditional big-blocked rear tyre than most.

The widely-spaced edge blocks do a great job of cornering predictably and confidently, but the shoulder treads are less successful at retaining momentum — the more upright knobs drag a little, which impacts on rolling speed.

Under braking, the dual-compound rubber and minimal centre tread are very well controlled, and the SS also handles mixed conditions without any drama. To sum up, the Minion SS rides great, but doesn’t feel as fast as some rivals…” – Mick Kirkman, MBR.co.uk, October 2016

“With the Maxxis Minion SS the raised shoulder tread lets you carve heavily into loose corners with total confidence. There’s no risk of the tyre breaking away early that you get with a lighter standard treaded tyre. Once you’re back out of the turns the SS lends itself to quick acceleration on undulating terrain. Whether in or out of the saddle the pace easily quickens, yet the high volume sizing and lowish weight (around the 750 – 800g area) lets you run lower pressures, especially when tubeless so comfort and small bump compliance is still there. Gone are the days of needing higher pressures for a quicker feel.

If you’re anything like us, you’ll want to set your summer treads up tubeless and leave them that way, so what happens if the rains arrive and the trails turn wet for a few days? Can the Maxxis Minion SS cope? Yes it can. With the traction and grip from front and rear suspension and the right handling skills there is enough traction for most wet trail centres and flatter off piste tracks, especially if the tyre pressure is reasonable low. With a tubeless set up and the aggressive shoulder tread it will get you up all but the greasiest climbs with just the sticky off-camber mudslides being the only real challenge.

It’s maybe not for everyone, but the Minion SS is certainly a good tyre to have as an option, especially if the dream of parched trails comes good this season. Give one a try and you may be leaving it on until September…” – Sean White, DirtMountainBike.com, April 2016

Conclusion: "The Minion is a specialty tyre, but it's also one that's usable in a wider range of conditions than its appearance might suggest. Paired with an aggressive front tyre it's an excellent option for riders looking for additional speed without sacrificing much in the way of control."

“The Minion SS arrived just as the dry and sunny summer weather began to slip away, giving me the chance to try it in trail conditions ranging from bone dry to perfectly tacky and all the way to wet and greasy. Setting the Minion SS up tubeless didn’t pose any problems, and I typically ran between 25 – 27 psi with it mounted to a 23mm internal width rim. I paired the Minion SS with the new Maxxis 2.5” Minion DHF in the front, creating the mullet of tire combos – business in the front and a party in the back. The more aggressive front tire ensured that the bike stayed on track in loose terrain, leaving the Minion SS free to shift and slide around when necessary. It’s a very enjoyable tire combination, and even in the steeps, there was more control and traction than I’d expected. The tall side knobs are what make the SS perform worlds better than a worn-out ‘regular’ Minion would – they prevent it from breaking free too suddenly and keep the wheel locked into the turns.

The most obvious benefit of a semi-slick tread pattern is the reduced rolling resistance, which was especially noticeable when spinning out the miles on a dirt road or smoother sections of singletrack. The Minion SS gets up to speed quickly and helps take the sting out of those long approaches, a welcome alternative to meatier tires that can make it feel like you’re riding through molasses.

As far as durability goes, even after a couple months of regular use the small center knobs, the area I expected to see the most signs of wear, are still holding their shape, and there hasn’t been any cracking or tearing of the side knobs. The Minion SS‘s total lifespan will depend on terrain and riding style, but it doesn’t seem as if it will be drastically shorter than that of a fully treaded tire.” – Mike Kazimer, PinkBike.com, November 2015

Conclusion: Would you recommend they tyre? "100%. If you like the ride feel of a rear tyre that encourages a bit of fishtailing, but you still want the front end grip to stop you crashing onto your face, then this is a great combo."

“EXO is Maxxis’s lightweight sidewall reinforcement. 3C stands for triple compound, naturally. It’s soft on the sides (42a durometer), firmer in the centre and firmer still underneath, for good rolling speed and excellent grip. The Minion SS is dual compound, not 3C, which is why it’s a little cheaper too.

They’re quick! We hoped these would roll well, but they’ve surpassed expectations in that regard. At the same time, they’re great in the corners, in a wide range of trail conditions.

No cuts, flats, tubeless leaks or other worries have arisen either, and Maxxis are traditionally rather indestructible.” – FlowMountainBike.com, September 2016

SingleTracks.com had some pretty good things to say about the Minion SS tyre:

“What do you get when you cross a burly downhill tire with a lightweight, fast-rolling one? Well, you get something that looks exactly like the new Maxxis Minion SS. To be honest, it’s an odd-looking tire that will leave some riders scratching their heads, but after running this tire for several weeks now I can tell you it’s oh-so-sweet on the trail.

Early on in my testing, one of the things I noticed is how well the Minion SS rear tire handles off-camber and side-hill trail sections. The side knobs literally cut into the high side of the trail, while the center tread rolls smoothly and confidently. The Minion SS tire makes easy work of old school singletrack trails in the mountains–no bench cut required.

I personally dig semi-slick tires like the Minion SS, though I understand this style of tire isn’t for everyone or for all conditions. But for trail and enduro riders who like to push the limits in relatively dry conditions, the Minion SS is an excellent choice. This is definitely a tire I plan to keep running for a long time.” – Jeff Barber, SingleTracks.com, October 2015 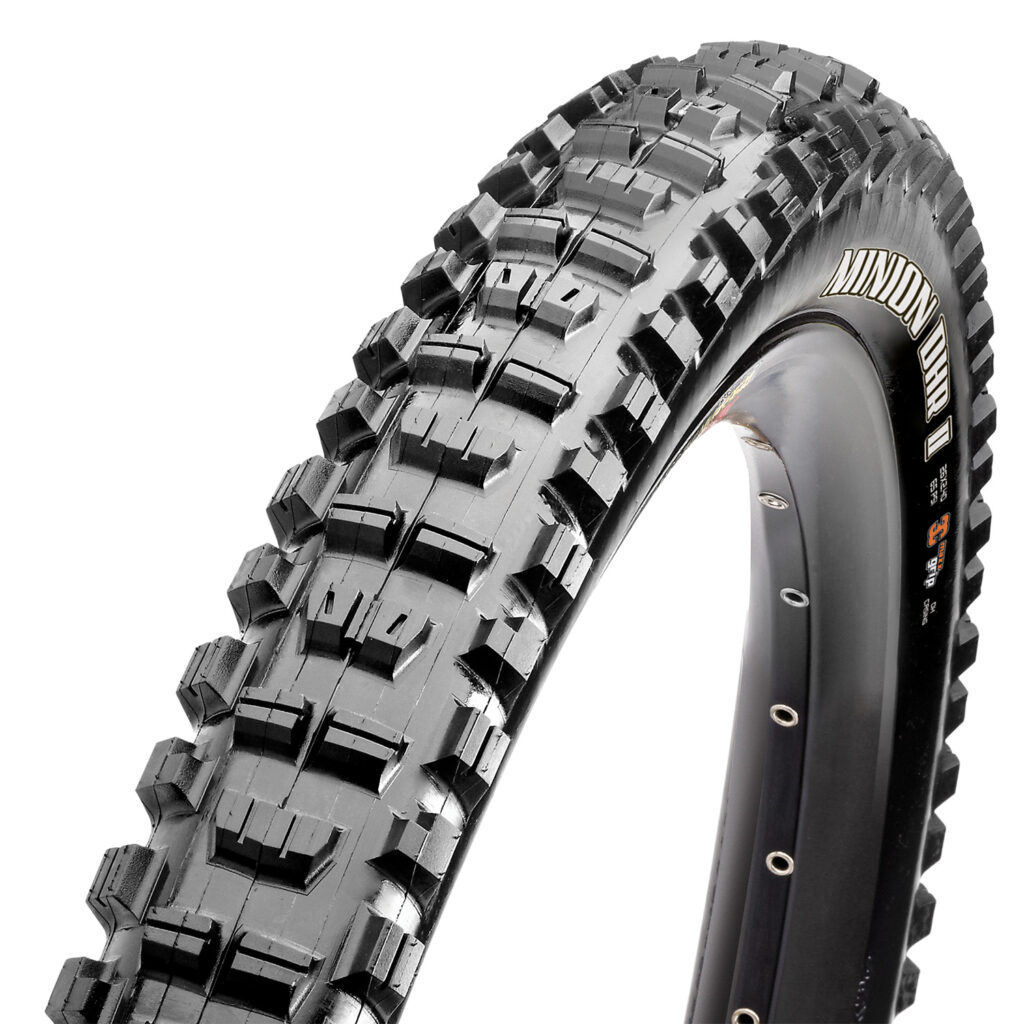